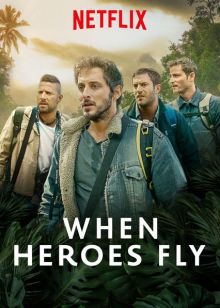 When Heroes Fly is a drama/thriller series that follows four friends reuniting years after they all had a falling out for one last mission — finding out what happened to a woman they all love, Yaeli, who they believed to have died in a car accident in Colombia.

The show follows Aviv, whose PTSD still badly affects him and who broke up with Yaeli despite still loving her; Dotan, who’s just been given two months to live; Dubi, Yaeli’s older brother who’s struggling with his faith; and Benda, a former drug addict who’s been living in Colombia for years and has turned his life around and now has a loving girlfriend named Maria.

One day, years after Yaeli ‘died’, Aviv gets a phone call from Benda, who’s seen a picture of Yaeli in the newspaper and is convinced she’s alive. Dotan and Dubi refuse to believe it until Benda sends them a photograph that convinces them all to go to Colombia to find out the truth. What follows is such an intense sequence of events that I watched the whole show in a day. It’s nonstop action and the shots of Colombia are gorgeous. It definitely made me miss South America! So beautiful.

The best part of the show is the brotherhood between the four guys, who all have their demons and are all dealing with different issues. The focus on mental and physical health, existential problems, and interpersonal relationships are all really well done and got me in the feels more than once.

Recommended for fans of thrillers, action/adventure, and crime dramas with a focus on family and characterisation. (I’m a stickler for good character development. Don’t give me cardboard!)

And if you recognise Aviv, it’s because the actor, Tomer Kapon, plays Frenchie in The Boys. (Also recommended!)