I’ve been on something of an Exorcist themed kick after watching the television show. I’m currently reading the book for the first time, which I’m really enjoying so far, but I’m also checking out movies of the like. The Possession was pretty good!

The Possession tells the story of Clyde and Stephanie, who are recently divorced and sharing custody of their kids, Emily and Hannah. When Clyde brings their daughters to a yard sale, Emily picks up an old wooden box with Hebrew writing on it. Little does she know the box is haunted by a dybbuk. Emily begins to act stranger and stranger — moths gather in her room, raw meat is consumed, she gets more and more withdrawn. Clyde realises something isn’t right with his daughter and sets out to help her.

What I really appreciated about this movie was that the characters turned to a Hasidic Jew for help with the exorcism, which is something I haven’t come across much in exorcism plots before. Instead of Latin, there’s Hebrew. It was really nice to see and I liked the different take on an exorcism. Apparently it’s based on a true story as well. CREEPY.

Jeffrey Dean Morgan was, as usual, wonderful in this. Really, the whole cast was great. The actress who played Emily (Natasha Calis) did an especially brilliant job!

I’d definitely recommend this to fans of horror! 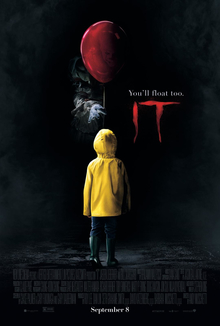 I followed my watch of The Possession with It. I don’t even think I could attempt to review It with anything coherent because Pennywise is going to be haunting my dreams for eternity. But it was definitely all levels of YIKES. Really well acted, though. Very impressed! I really did forget the entire plot outside of evil clown. The only thing I did remember was the sink scene and the new version is the stuff of nightmares.

Thanks, Stephen King, I won’t be sleeping for a month.