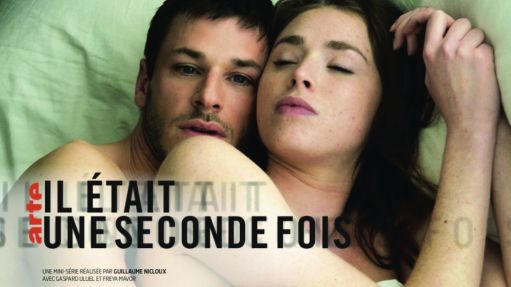 ‘Relationships are all the same, but no one experiences them the same way.’

Il était une seconde fois, or Twice Upon a Time, centres around Vincent and Louise. It’s told out of order, switching back and forth between the past and the present. I did notice it switching from full screen to wide screen as well, so I think that was an intentional method to differentiate between the past and the present. If you don’t pay attention to that, though, it’s easy to get lost. The changes happen without warning.

The series starts off with Vincent basically a drunken mess who’s spiralling into depression and destruction after the end of his relationship with Louise. Over the course of the series, you find out that Vincent and Louise met one night in a pub and instantly hit it off. They agree neither wants a relationship but their chemistry is undeniable and they get into a relationship despite Louise having an unfinished relationship with James, and Vincent still seeing the mother of his son.

One day, a postman leaves a box, ‘the cube’, with Vincent. It’s quite literally just a box. When he’s trying to figure out what it does, he realises the box doesn’t have a back and comes out on the other side nine months in the past with his relationship still intact.

In both timelines, Louise struggles with opening up to Vincent after a traumatic event in her last relationship has left her reeling. It’s revealed later that she was having an affair with a married man and when the wife found out, she jumped in front of a train with Louise there, riddling her with guilt for the rest of her life.

Madly in love with Louise and wanting to fix their relationship, he goes back and forth between the past with Louise and the present with his son, not wanting to lose either. His inability to pick one leads to both sides missing him and wondering where he’s been for days on end. Louise tolerates it for a time, listening to his ‘story’ about time travel and viewing it as something like method acting for writers. The only person who believes Vincent is his brother, a man struggling with schizophrenia.

In the present, the postman who left the cube keeps stalking him to get the box back, asking Vincent if he can search his house, his car, and generally just being weird. There are a few others who keep up the weirdness and trying to figure out who wants what and why is difficult. The background of the cube is never really explained outside of his brother making a few ideas about light and photons. And there are background figures trying to get the cube back from Vincent, too, but other than a few lines, these characters aren’t delved into. It leaves you with quite a few questions, although I think the point of the series was to make an existential statement rather than a scientific drama.

Overall the series is quite interesting, and Gaspard Ulliel and Freya Mavor have amazing chemistry and their acting is perfection, but I do wish it’d been a few episodes longer, told a little less convolutedly, and the science fiction/time travel explained more.